How Credit Scores and Down Payment affect your interest rate.

Comparing FHA vs Conventional mortgage loans:
How Credit scores and Down Payment
affect your interest rate and Mortgage Insurance costs. 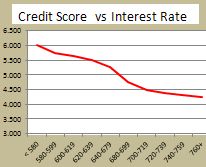 With the 2013 FHA mortgage insurance rule changes, folks buying “that final house” who have 680 (or better) scores will fare better (and at higher scores- much, much better) using conventional financing, and the first step of the process should be to review credit scores with a local, licensed mortgage loan officer – the intent being to tweak (raise) the scores. You can jump down to the results by clicking here.

FHA has raised monthly mortgage insurance fees. How much does it affect new purchasers?
Over the years, with its flexible rules, low down payments, competitive fixed rates, and reasonably priced mortgage insurance fees, FHA has been an easy favorite for Lenders and Loan officers when “cash-strapped” home buyers (and purchasers with less-than-good-credit) needed financing.

No more. The new 2013 policies- leaving the mortgage insurance in place for the life of the loan (and also raising monthly premiums a little), DOUBLES what the homeowner will pay FHA in monthly insurance payments over the thirty year loan life. For some borrowers, FHA loans should now come with a warning label “DON’ TAKE THIS LOAN ON YOUR LAST HOUSE”

This rule change is not a big deal to the 1st time home-buying family who sells after 9 to 10 years. That mortgage insurance would have still been in effect when the house sold under the old rules as well.

But for the buyer purchasing that “long-term-home”?
For good-credit buyers purchasing the final house, the long-term overall cost of the FHA option goes from winning “hands-down” to dead last. (Keep in mind that the odds of refinancing today’ low rates are very remote.)

While FHA has been increasing fees over the past couple years, the private mortgage insurance companies (who compete against FHA) have been inventing a “dozen flavors of vanilla”—in other words… “How many ways can we find to make mortgage insurance fees appear more palatable to borrowers while still collecting for the higher risk of low down payment loans?”

CONVENTIONAL MORTGAGE INSURANCE – CHOICES
• Monthly Only: No up-front lump sum, mortgage insurance payments are paid monthly
• Single Premium Financed: Lump sum. No monthly. Financed in to the loan- or can be paid in cash
• Single Premium Rate Credit: Lump sum. Paid in cash by borrower, but the funds come from raising the loan’ interest rate.
• Lender-Paid-Mortgage-Insurance (LPMI) Lender itself pays the insurer, usually by raising the rate.
• Split Plans1, 2, and 3: Simply different combinations of up-front amounts with different monthly amounts.

ADDITIONAL NOTES
Most lenders do not offer all of the programs listed. It gets way too messy. Analyzing the cost-benefit over time for all the credit score and down payment combinations of all these loan programs can be done using Excel.
In addition to the findings below, it turns out show that some of the FHA comparison charts provided by lenders and
private insurers are misleading and even wrong, and unwitting loan officers show those charts to borrowers.
Never-the-less, FHA’s most recent rule revisions are significant.
THE RATING SYSTEM
The most logical way to compare mortgage financing programs is:
“How much are my payments over the period I own my house and have my mortgage?” combined with “How much will I still owe when I sell?” Saving $25 per month doesn’t help much when you sell in three years and owe $3000 more on the mortgage because of the financing type selected. Graphing all the scenarios together provides solid answers. A few graph samples are shown at the bottom.

THREE PERCENT DOWN (with really good credit: 720 score or better)

Under old FHA rules, Conventional is better for the first 48 months. After 48 months, FHA wins.
And now with the new FHA rule changes?

THREE PERCENT DOWN (with average to good credit: 680 – 719 score)
Similar to above, where FHA crushed conventional after the first four years.
And with the changes? Well, the private monthly mortgage insurance is so expensive that FHA is better until about 17 years into the loan. It’ interesting that the results are almost identical for a borrower with average 681 scores as with 719 scores (38 points better).

FIVE PERCENT DOWN (with really good credit: 720 scores or better) Conventional financing wins.
-Expect to sell in six years or less? Let the lender pay the mortgage insurance by charging a higher rate.
-Seven to fifteen years? Take the Single Premium insurance. Finance it if the lender will let you.
-Keeping it fifteen years or more? Take the monthly-only. It drops off after eight to nine years. You can make it drop faster if you want by prepaying.

FIVE PERCENT DOWN (with average to good credit: 680 -719 scores)
Under the old rules, the conventional lender-paid insurance was best for the first eight years, then FHA.
Under new rules? FHA is never best.
Sure you’ sell within ten years? Take the 3/4-or-so higher rate and have the lender pay the insurance.
After about twelve years, that plan goes to last place and the Conventional monthly wins.

TEN PERCENT DOWN (with really good credit: 720 scores or better) Conventional financing wins.
– First ten years—let the lender pay it by raising the rate about a quarter percent.
-After that- Monthly and Single-Premium-financed are about equal (slight edge to Single financed).

TEN PERCENT DOWN (with average to good credit: 680 – 719 scores)
-First eight years- Have the lender pay it. They will raise the rate 5/8th s of a percent.
– After that- The Conventional monthly is best. Unsure how long ? An acceptable middle ground is the financed
mortgage insurance. Once again, under the new rules, FHA is never the best choice here.

WHAT HAPPENS AS SCORES DROP UNDER 680?

FIVE PERCENT DOWN- (average credit or below : 679 scores and less) FHA financing wins.
Between FannieMae, FreddieMac, and the mortgage insurance companies, the added risk premiums force the FHA loan to be the winner after only three years into the loan, even under the new rules.

CONCLUSIONS*
Once borrowers and loan officers figure out that: folks buying “that final house” who have 680 or better scores will do better (and with the best scores- MUCH better) using conventional financing, FHA will lose the very borrowers it needed to keep (the good credit borrowers, and the few 10% and 20% down borrowers it had). And another note, FHA won’ start receiving most of this additional revenue for over NINE YEARS (when the monthly mortgage insurance would have dropped off under the old system).

These results are the biggest argument for reviewing your credit with a local, licensed mortgage loan officer (like me) – the intent being to improve scores–before you start house hunting .

If you have questions about this or related questions comparing FHA vs Conventional mortgage loans, email or call me:
Scott Lucas, Licensed Loan Officer 443-829-2210
ScottLucas@baltimoreloanofficer.com

*The FHA and conventional programs all require different down payments. Comparisons were based on dual down payment scenarios meeting each program’s requirements.

If you are interested in reading the actual FHA announcement regarding this new FHA policy, Clik this pdf link
Samples of Mortgage Program Comparison Graphs follow: 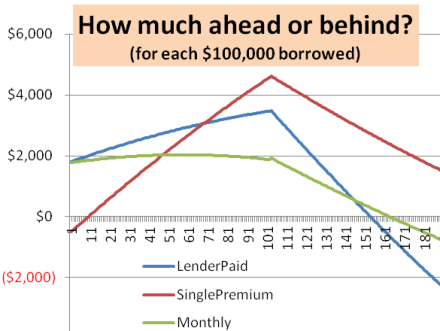 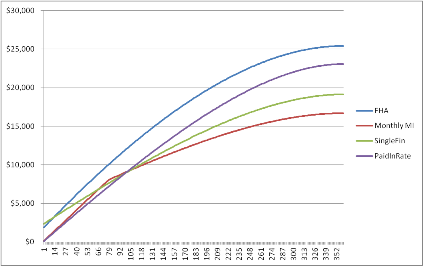 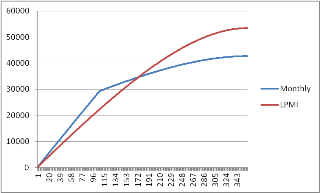 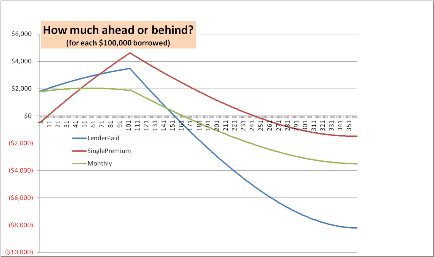 For additional details in Baltimore City, Baltimore County, Harford County and all Maryland counties, call us